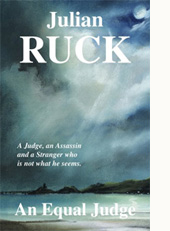 On her way to the top, Her Honour Judge Charlotte Treharne seeks truth at every turn but dangerous forces combined with lethal intent are determined to stop her no matter what the cost. Will her ability to endure be enough to survive?

Meanwhile Charlotte's mother Lise Treharne maintains her iron grip on the family home, Ragged Cliffs, but even her strength of will begins to falter in the face of such deadly acts of attrition and threats to her family's future.

From London and Vienna to the beautiful coast of the Gower Peninsula, the story twists and turns through the memories of a broken past and the loving foibles of a fragile future. Unpredictable and shocking, this gripping story will keep the reader hooked right up to an ending as unforeseen as the beginning.

What an emotional roller coaster of a novel! One certainly needs concentration as the highly colourful and incorrigible characters race across the page. There is never a dull moment where Her Honour Judge Charlotte Treharne's extended family is concerned. Charlotte, Ruck's unpredictable heroine, is reminiscent of a chameleon: one moment every bit the judge, the next a petite redheaded siren with freckles on her nose.

The supporting cast are no less vibrant, each with their individual plots. The matriarch of the family, Charlotte's mother Lise Treharne, built up a highly successful business; now an octogenarian, she has a past that will not be forgotten. Charlotte's brother, Kristian, a farmer, a gentleman, a hero with a wooden leg, is married to his Guardian-reading wife Myfanwy. Angharad, their wilful daughter, approaching middle age, still has the desire to shock her parents. As depraved, revengeful and murderous personalities have the reader reeling, they embark upon suicide, eating disorders and the desire for babies.

There is an engaging humour, together with a controversial, if not politically incorrect, dialogue. 'When it comes to "ageist sexism" Charlotte was all for it. In her view the only competent and reliable employee was a woman over fifty-five, and even that was risky. She had never been one to shirk the truth, which for many men, even her fellow Judges, was part of her attraction. Damn, Charlotte grinned, she wouldn't have employed herself, let alone any other woman. If anyone was typical of her breed, she was!'

Ruck is a masterful and perceptive storyteller; he would have to be with such an abundance of characters in his narrative. An Equal Judge is a book you will not want to put down until the very necessary and appeasing epilogue is read. This is the first of Julian Ruck's novels that I have read. I shall now be scouring the bookshelves for his name.