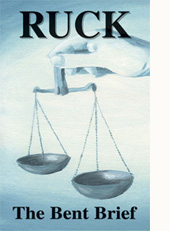 The novel is about an old school lawyer, Edwin Hillyard, who struggles with the new dotcom world. He accidentally kills his indulged wife, Clare, when he discovers her in bed with another woman. Before he knows it he is the main actor in a dramatic and nail biting trial. What will the verdict be? And will his new love, a Sikh doctor, stand by him?

The Bent Brief is written to entertain and compel with its page-turning narrative and fast moving twists and turns. Here is a thriller full to the brim with humour, love, action and suspense, forcing the reader to race to the end. Crime thriller fans will be hooked! The author's first-hand legal experience has directly informed his novels, making The Bent brief a vividly realistic read.

Order direct from publisher and obtain a free copy of Ragged Cliffs with your order! Available from all good books shops. Also available at Amazon and on Amazon Kindle. 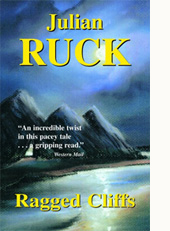 Lise Jacobson, a young Danish girl, is a victim of vicious World War II retribution. She leaves Denmark and discovers success and tragedy in the Gower Peninsula of South Wales. During the 1950's and '60's she is persecuted by betrayal, deceit and revenge but the passion of her Celtic mother and the warrior spirit of her Danish father give her the strength to fight and prevail as a love behind closed doors tames and heals the cruelty of her past. Her real story begins and ends in the yellow sands of a Celtic dream.

An incredible twist in this pacey tale -------- a gripping read.

A captivating read in a beautiful setting -----

A very enjoyable read, once you pick it up you can't put it down. I was hooked. 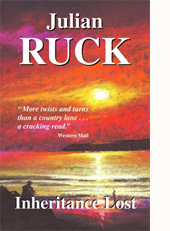 Injured and forgotten by the Falklands War, Captain Kristian Treharne embarks upon the more challenging campaign of renewing an old love affair - a mission fraught with more unexploded bombs and surprises than even his veteran instincts are able to anticipate. Meanwhile, his sister Charlotte Treharne, now an aspiring young lawyer, discovers a more violent secret lurking in the wailing winds that tear through the tragic memories of her mother's beloved home Ragged Cliffs.

The past and the present clash with each other in a maelstrom of punishment, revenge and redemption while the uncompromising cliffs of the Gower Peninsula look on and choose their own destiny.

Order direct from the publisher. Also available from all good books shops and Amazon Kindle

A gripping read, impossible to put down. An intriguing story, sharply told.

More twists and turns than a country lane.......a cracking read.

On her way to the top, Her Honour Judge Charlotte Treharne seeks truth at every turn but dangerous forces combined with lethal intent are determined to stop her no matter what the cost. Will her ability to endure be enough to survive?

Meanwhile Charlotte's mother Lise Treharne maintains her iron grip on the family home, Ragged Cliffs, but even her strength of will begins to falter in the face of such deadly acts of attrition and threats to her family's future.

From London and Vienna to the beautiful coast of the Gower Peninsula, the story twists and turns through the memories of a broken past and the loving foibles of a fragile future. Unpredictable and shocking, this gripping story will keep the reader hooked right up to an ending as unforeseen as the beginning.

What an emotional roller coaster of a novel! One certainly needs concentration as the highly colourful and incorrigible characters race across the page. There is never a dull moment where Her Honour Judge Charlotte Treharne's extended family is concerned. Charlotte, Ruck's unpredictable heroine, is reminiscent of a chameleon: one moment every bit the judge, the next a petite redheaded siren with freckles on her nose.

The supporting cast are no less vibrant, each with their individual plots. The matriarch of the family, Charlotte’s mother Lise Treharne, built up a highly successful business; now an octogenarian, she has a past that will not be forgotten. Charlotte’s brother, Kristian, a farmer, a gentleman, a hero with a wooden leg, is married to his Guardian-reading wife Myfanwy. Angharad, their wilful daughter, approaching middle age, still has the desire to shock her parents. As depraved, revengeful and murderous personalities have the reader reeling, they embark upon suicide, eating disorders and the desire for babies.

There is an engaging humour, together with a controversial, if not politically incorrect, dialogue. 'When it comes to "ageist sexism" Charlotte was all for it. In her view the only competent and reliable employee was a woman over fifty-five, and even that was risky. She had never been one to shirk the truth, which for many men, even her fellow Judges, was part of her attraction. Damn, Charlotte grinned, she wouldn't have employed herself, let alone any other woman. If anyone was typical of her breed, she was!'

Ruck is a masterful and perceptive storyteller; he would have to be with such an abundance of characters in his narrative. An Equal Judge is a book you will not want to put down until the very necessary and appeasing epilogue is read. This is the first of Julian Ruck's novels that I have read. I shall now be scouring the bookshelves for his name.

All the comments on the book covers are completely justified........Julian Ruck is a storyteller extraordinaire!"

Absolutely brilliant and could not put it down!"

My daughter and I are at a loss to know what to read next that will satisfy our thirst for Julian Ruck"s type of writing......we cannot wait for the next book to come onto the book shelves."

I thoroughly enjoyed the first two novels....you can never predict the endings."

The reader is enticed into making assumptions as to what will happen and then is suddenly surprised by an unexpected twist....I"m hooked!"

An excellent read. Awaiting the next book!"

Cannot wait until the next one!"