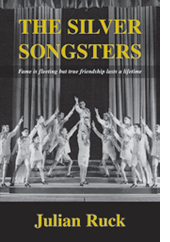 Fame is fleeting but true friendship can last a lifetime…

It is 1937. Two boy sopranos aged fourteen, one a rascal from Llantwit Major South Wales and the other, a Jewish refugee fleeing from Nazi Germany, are about to have their lives changed forever.

Young John Rees takes the newly arrived refugee Issy Kaddar, under his wing when they are introduced to each other at a Church choir in South Wales. They are recruited by Steffani to join his renowned singing troupe Steffani's Silver Songsters. They meet many a famous singer and variety act of that time and become the equivalent of today's super stars. John becomes 'Britain's Greatest Boy Soprano' – with Issy always at his side.

A chorus girl tests the two boys to the limits of their youthful exuberance and budding manhood - not to mention the deep loyalty that they feel for one another. Will their friendship survive the calculating wiles of such a beautiful and streetwise young woman?

An often hilarious evocation of pre-war showbusiness, where talent could transform a young man's life but a male soprano's professional career was shorter than a footballer's is today. It's also a moving story of how boyhood friendship can endure and flourish into manhood and old age, in spite of being tested by betrayal and terrible tragedy.

As with all Ruck's novels, the real twist in the tale doesn't arrive until the Epilogue is read. Readers will be on the edge of their seats to find out the truth.

Inspired by a true story: Swansea man Iltyd John Loveluck the author's father in law, was the teenage Pop Idol of his day. In 1938 he was billed as 'Britain's Greatest Boy Soprano', touring the country and performing with the likes of Vera Lynn, Stefan Grapelli, Billy Cotton, Ken 'Snakehips' Jonson, Max Wall and Gracie Fields. It was hearing his story – the places he played and the people he met - that inspired Julian to write the book.